The bull is back on the Beursplein

After a necessary repair, the famous bronze statue of the bull has returned to the entrance of the Amsterdam stock exchange. The bull, which was secretly placed there in 2012 by Italian-American artist Arturo di Modica (1941-2021), broke a leg at the end of 2019. The returned sculpture is a replica of the ‘Charging Bull’ which the artist placed at the New York Stock Exchange in secret in 1989.

Amsterdam was not an accidental choice. At that time, the Amsterdam stock exchange was part of the transatlantic stock exchange group NYSE Euronext. And as the birthplace of the world stock exchange, Amsterdam could not do without a bull. Just like in New York, the bull soon became a tourist attraction. And just like on Wall Street – shortly after Black Monday – Di Modica wanted to send a positive message during the difficult stock market year of 2012: stay positive in times of crisis!

The bull is known, especially in Anglo-Saxon countries, to be a symbol for optimism and appreciation of value on the stock exchange (bull market). It is often depicted fighting a bear, which in turn reflects a period of pessimism and stock market decline (bear market). The analogy here is that the bull throws the bear (read: the low stock market prices) up with his horns, while the bear tries to pull the bull (read: the high stock market prices) down with his claws. Together, they fight to symbolise the (strong) ups and downs of the market. In this sense, this symbolism differs from Mercury, the age-old figurehead of the Amsterdam stock exchange, who symbolises balanced prices and a stable market. 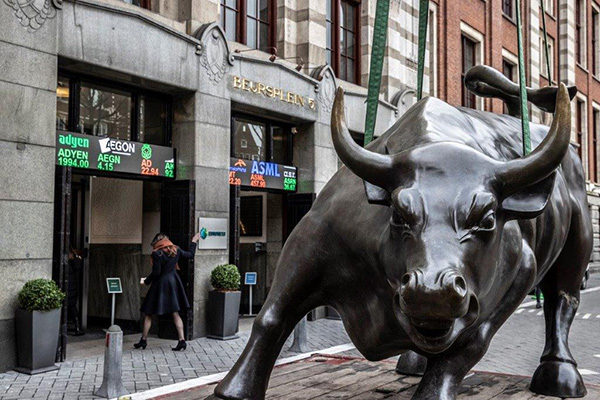