Pop music back on Beursplein 5

Universal Music Group (UMG), one of the largest music companies in the world, will be listed on the Amsterdam stock exchange today. Vivendi, the Paris-based parent company of UMG, is the initiator of the IPO. With this demerger, the French media conglomerate is trying to realise a better valuation of UMG. And the results speak for themselves: the IPO has been a great success with immediate substantial share price increases and a total market value of more than €45 billion after the first trading day.

This makes UMG worth more than Vivendi itself and one of the largest IPOs in Amsterdam in years. According to experts, the explanation for this great success is simple: after a difficult period with declining numbers due to a decline in CD sales, the music industry has returned to its former glory with the rise of streaming services and sharply increasing sales, making it lucrative for investors.

No new shares will be issued. The IPO is limited to bringing 60 percent of the existing shares to the market. In short, pop music is returning to Beursplein 5. Polygram, the former Dutch music group whose activities ended up at UMG via a diversion after a takeover, also had an independent listing on the Damrak between 1989 and 1998. Great artists from both the Netherlands and abroad will indirectly be (re)connected with the Amsterdam stock exchange when UMG goes public. Think, for instance, of Lady Gaga, Rihanna, Billie Eilish, Kensington, the Rolling Stones, U2 and Abba. 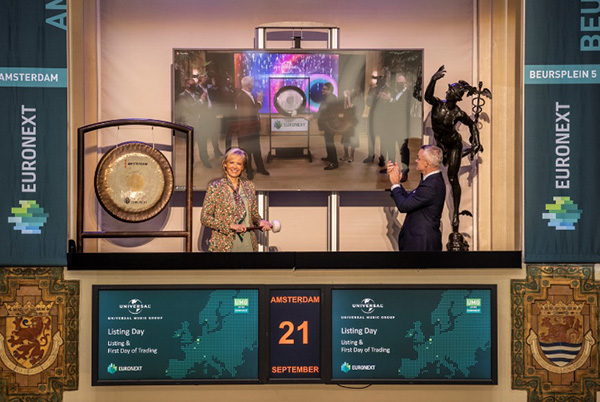