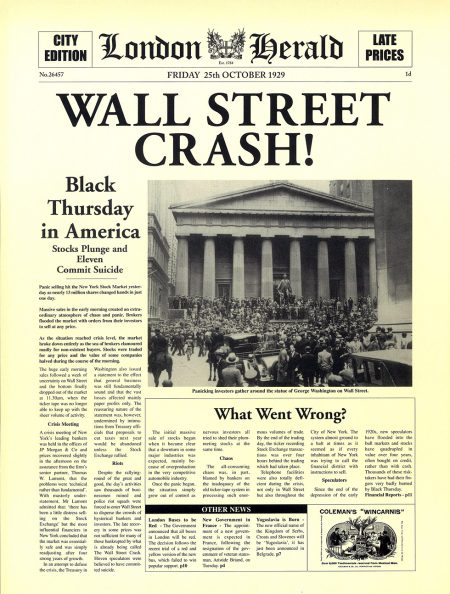 The crash caused many American investors and traders to suffer big losses. Judging by this picture, this gentleman lost his entire fortune and found himself forced to sell his car.

The effect of the stock market crash on the Amsterdam exchange was initially limited. Prices dropped here as well, but not nearly as heavily as in New York. From 1930 onwards, the consequences were felt stronger in Amsterdam too, as appears from this newspaper article.

Around 1930, securities traders at Beursplein 5 attentively follow the development of the prices of the many American funds listed in Amsterdam.

On November 1, 1929, the board of the Amsterdam stock exchange gathered for an emergency meeting. This was prompted by a petition in which 181 of the 795 members asked to close the exchange on Saturday, November 2nd. After all, the New York and London stock exchanges also closed for two days because of a market crash. The petition was rejected. The stock exchange could only be closed in case of emergency, and apparently, this was not one.

After years of rising share prices and an atmosphere in which abundance reigned, prices began to drop in New York on Monday evening, October 21, 1929. The Dow Jones reached its highest point on September 19th, but gradually, critical comments increased. Did those prices still truly reflect the economic situation? After all, a few major bankruptcies had occurred, and unemployment increased. The criticism became more and more strong. In the days after October 21st, the decrease continued at an accelerated pace, bottoming on Thursday, October 24th: Black Thursday. Investors panicked and tried to get rid of their securities. Sharp price drops continued until November 13th. By that time, the American stock exchange had lost 48% of its value.

During the same period, the Amsterdam CBS index (the contemporary AEX index, if you will) dropped by 15%. This was a clear signal that the Dutch economy was not that dependent on what went on in America yet. Nevertheless, the crisis hit the Netherlands as well. Over the second half of 1930, no more companies went to the stock exchange. The thirties were marked by declining business results, skyrocketing unemployment rates, a deteriorating stock market climate, and a strong decline in the number of stock exchange members. Between 1930 and 1940, the number of companies listed in Amsterdam halved to approximately 1,500.