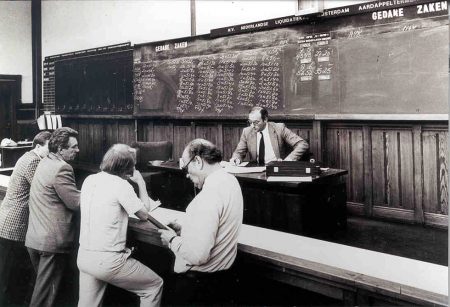 The former Agrarische Termijnmarkt (Agricultural Futures Market) in the Beurs van Berlage around the year 1980. In the background, one can see that the clearing of transactions was arranged through clearing house NLK KAS.

Commodity traders in the Beurs van Rotterdam, inspecting samples. Clearing arose within the futures market. Deals were closed on the basis of samples of goods well in advance off actual delivery. Therefore certainty about the future settlement was very valuable.

Announcement of the establishment of the clearing house Amsterdamsche Liquidatiekas in 1888.

Upon its establishment, clearing house Amsterdamsche Liquidatiekas issued two thousand shares with a joint worth of one million guilders.

The origins of clearing

In 1888, futures markets for coffee opened in Amsterdam and Rotterdam. According to good custom in commodity trading, a liquidation box (‘liquidatiekas’) was immediately established in both cities as well. These liquidation boxes ensured an efficient and reliable handling of transactions – more commonly known as clearing in professional circles. Additionally, the liquidation boxes take the risk that a counterparty will not pay or deliver. Over the course of the twentieth century, the practice of clearing and hedging the counterparty risk was taken over by the Amsterdam stock exchange and options exchange, which set up their own subsidiaries for this purpose.

In 1959, the liquidation boxes in Amsterdam and Rotterdam merged into a national organization, NLK KAS, which, in turn, was part of exchange organization Euronext for a while around the turn of the century. Meanwhile, the clearing has become part of an independent clearing House, LCH Clearnet. Clearing is very important for exchange trading, and hedging the counterparty risk is even something that sets it apart from off-exchange trading. It is not without reason that the debate on the question whether clearing organizations should be independent or part of the exchange company has kept recurring in recent international exchange mergers.