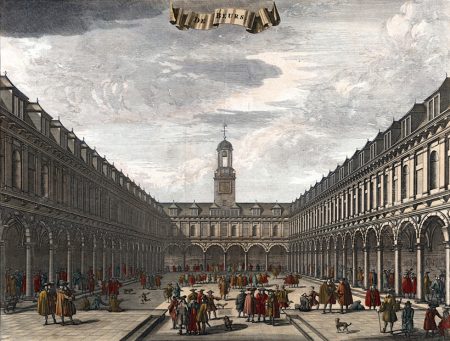 With the arrival of the Nieuwe Handel-Sociëteit (New Trade Society), two competing securities organizations were active on the Beurs van Hendrick de Keyser as of 1833.

First pages of the statutes of the Nieuwe Handel-Sociëteit (New Trade Society).

The ‘rear entrance’ of the Beurs van Hendrick de Keyser. Coming from the Dam square, most traders entered the exchange here every day.

The Nieuwe Handel-Societeit (New Trade Society), also called Effecten-Societeit (Securities Society), started establishing and publishing its own rates, separate from the old ‘Societeit’ tot Nut des Obligatiehandels (Society for the Benefit of Bond trading). These were much more accurate, as evidenced by this newspaper from 1837.

Discontented members of the Collegie tot Nut des Obligatiehandels founded the Nieuwe Handel-Sociëteit (New Trade Society) in 1833. They were disappointed by the wide margins the Collegie used when publishing the prices of transactions. According to them, listings in Cotray’s Price List such as 76 to 84 or 140 to 170 were far too imprecise. Therefore, the Nieuwe Handel-Sociëteit independently gathered stock price quotations, based on actual trading, and published these in the Handelsblad, one of the precursors of the NRC newspaper. The figures were considerably more accurate: prices were shown to one sixteenth of one percent. The accuracy of the price publication of the Nieuwe Handel-Sociëteit was trusted the most among investors from the very beginning, and it was therefore adopted by the Collegie fairly soon.

In fact, both the Collegie and the Nieuwe Handel-Sociëteit were striving towards the same goal: more transparent trade. Both organizations also acted jointly, for example, in 1848, when there was another threat of revolution in France. In the Handelsblad, the Collegie and the Sociëteit issued a call to close the exchange for a few days in order to prevent a panic-driven securities market. It was likely that some form of an official collaboration would arise over time. A first sign of this was revealed in 1856 when the Algemeen Beurs-Comité voor Publieke Fondsen (General Exchange Committee for Public Funds) was jointly founded. One year later – in a time marked by a re-emergence of securities trade – this resulted in a merger between the Collegie and the Nieuwe Handel-Sociëteit into the Effecten-Sociëteit(Securities Society).