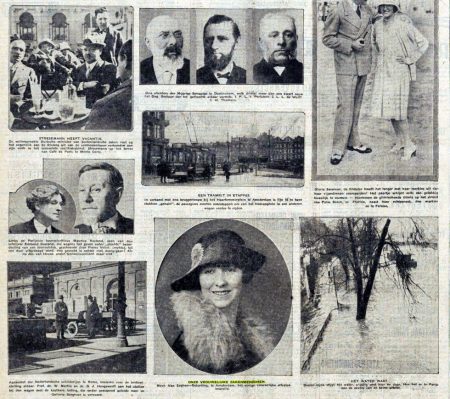 The Algemeen Dagblad paid attention to the first female member of the stock exchange.

After their playful reception, accompanied by songs and the smoking of cigars, the first female exchange clerks quickly proceeded to doing business.

The first woman on the exchange

“Today was a memorable day in the history of the Amsterdam Securities Exchange. H.M. the Woman made her appearance in the temple, which had hitherto been the undisputed territory of men.” This is how the Handelsblad, publication of April 16, 1923, described how Miss Henriëtte Wilhelmina Deterding, the first female member, joined the securities exchange. She was accompanied in by W.G. Wendelaar, stock exchange chairman, and there were flowers. Her membership lasted until 1931. However, the arrival of Miss Deterding was not a harbinger of a new era. The stock exchange was and remained a male bastion.

Johanna Borski-van de Velde, who lived from 1764 to 1846, might have been jealous of Miss Deterding. After her husband died in 1814, Johanna ran a considerable financial empire, the Firma Weduwe Borski, including securities brokers. She moved in the highest financial circles and led the company as successfully as her husband before her. However, she had to relinquish one thing to her male attorney: the representation of the firm on the securities exchange. In those days, women were only allowed inside as spectators.

In February 1975, the stock exchange welcomed the first three female  exchange clerks; their arrival was made possible by an amendment of the operator regulations. The fact that this was accompanied by songs with lyrics (in Dutch) such as “Oh, you are so beautiful” and “You can only look…” indicates that this was still a special event at the time. And although today the number of women in the exchange sector has increases, the arrival of the first female exchange president in 2019 was still a special event.