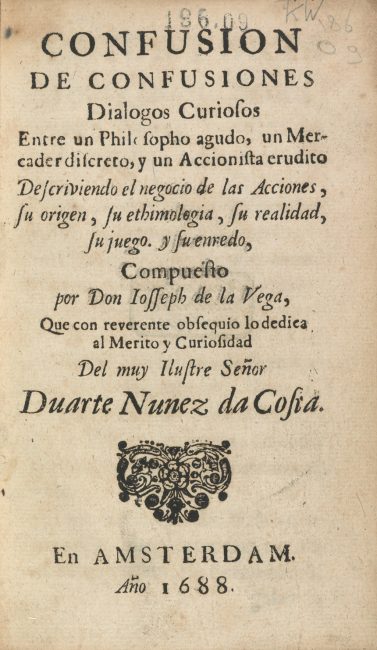 Title page of the first edition of Confusion de Confusiones (Confusion of Confusions), originally published in Spanish, in 1688. Since then, the book has been republished and retranslated many times.

When De la Vega described Amsterdam share trading, trade took place at the Beurs van Hendrick de Keyser. But according to him, a lot of trade was conducted on the streets and in coffee houses in addition to this.

Confusion de Confusiones (Confusion of Confusions) was published in a turbulent year on the exchange. Among investors, there was great uncertainty about the - ultimately successful - invasion of England by Dutch stadtholder and future King of England Willem III.

In 1688, the book ‘Confusion de Confusiones’ (Confusion of Confusions), written by Portuguese-Jewish author Josseph de la Vega, was published. It was the first book in the world that solely covered the topic of securities trading. In the book, which was published following a brief stock market crash in the same year, we take cognizance of conversations between a philosopher, a merchant, and a shareholder. It is not surprising that De la Vega took the goings-on at the Amsterdam stock exchange as a subject. The securities exchange in Amsterdam was the first one in the world, and Josseph came to Amsterdam as a child when his parents fled the Spanish Inquisition.

The author considered securities trading to be useful, but he certainly wanted to warn his readers of its dangers, too. The fact that he wrote the book in Spanish possibly indicates that he had primarily written it for his Jewish contacts in other European trading cities. His work will undoubtedly have contributed to the fact that knowledge about securities trading was able to spread on a global level, the most striking result perhaps being that London took over the Amsterdam stock exchange model. De la Vega wrote that one needed to be careful when providing investment advice and that one had to take both profits and losses into account. Investors should have patience as well as enough money.

Since the book hardly lost any topicality, it is still being sold, read, and appreciated. And while the book is not easy to read – especially not for someone from the 21st century – the Financial Times still lists ‘Confusion of Confusions’ as one of the ten best books on stock exchange ever written.