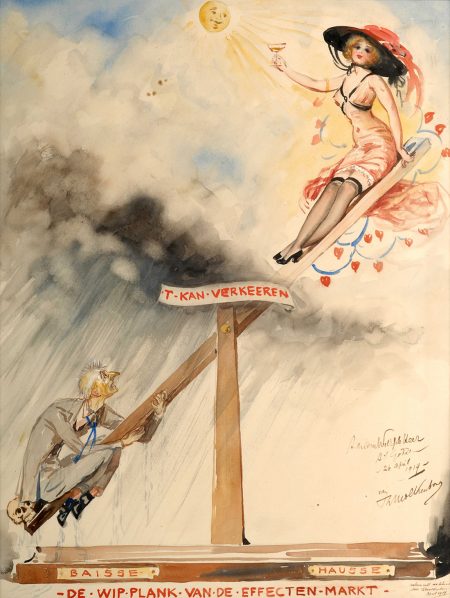 Even before the introduction of the AEX index, people knew that things could turn around in the securities market.

Tjerk Westerterp - here during the opening of an investor market in 1990 - created the AEX index in 1983. To the surprise of the options exchange director (1978-1993) himself, the index, developed for the purpose of trading index options, quickly grew into the ultimate economic indicator of the Netherlands.

In 1997, the AEX index exceeded the historic 1,000-point threshold (still based on guilders at that time). As a result, the ticker tape on the facade of Rokin 65 had to be replaced.

The development of the AEX index is still closely watched at Beursplein 5.

Until 1983, the Centraal Bureau voor de Statistiek (Statistics Netherlands) was the only institution in the Netherlands that published a stock market indicator. All funds were represented in the CBS index. The EOE index – the current AEX index – introduced a market index containing only the most important shares: the first blue chip index in Europe.

Tjerk Westerterp, the first director of the Amsterdam Options Exchange, selected 13 funds to be included on the new index: ABN, Ahold, Akzo, Amro, Gist-Brocades, Heineken, Hoogovens, KLM, Royal Dutch, Nationale Nederlanden, Philips, Unilever and Nedlloyd. Later on, this list grew to contain 20 companies, and it eventually ended up containing the current number of 25 funds. Until recently, the selection was always made based on the trading turnover on the securities exchange. Since 2014, the stock market value of freely tradable shares forms the starting point. After its introduction in 1983, several voices protested that an index containing as few funds as this one could never serve as a stock market indicator, but in practice, the movements of the AEX index proved to accurately correspond with the existing wide composite indices. As a result, the new index quickly grew into its current status, namely, that of the most important stock market index of the Netherlands.

The fact that the index’s basket of shares was not too bulky had two advantages. Unlike the CBS index, the level of the index could be calculated quickly – even in the beginning, this was already done every 15 seconds – and the index was readily marketable. The latter is a prerequisite for an index on which  options are listed , and it was ultimately for that purpose that Westerterp had created the AEX index. The value of the index has been euros-based since 1999, but in 1983, it started at a value of one hundred guilders (€ 45,38). On September 4, 2000, the index reached the highest closing level ever: 701.56 points.