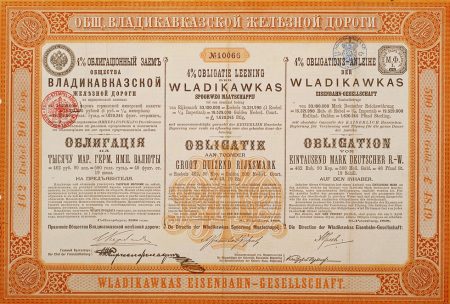 Because of the Russian Revolution of 1917, all Russian government and railroad bonds, such as this loan of the Wladikawkas Railroad Company, became worthless from one moment to the next.

The bonds of the Russian railroad funds were very popular among Dutch investors. One major reason was that these were guaranteed by the Russian State. This guarantee turned out to be worthless after the revolution in 1917.

Despite the efforts of several authorities and committees, the aggrieved Dutch holders of Russian securities have never received any return on their investments. The estimated overall loss was one and a half billion guilders at that time.

Expectations regarding industrialization and the rise of Russia made Russian securities popular among Western European investors. The October Revolution of 1917, during which Bolsheviks led by Lenin seized power, threw a spanner in the works. Dutch investors had invested an estimated one to two billion guilders in Russian bonds and railroad loans that were guaranteed by the state. All at once, these were worthless. After the revolution, the Russian Council of People’s Commissars discontinued interest payments as well as principal payments. All loans that were obtained or guaranteed by ‘the governments of the Russian bourgeoisie’ were declared invalid.

A commission of the Vereniging voor de Effectenhandel (Amsterdam Stock Exchange Association) that stood up for the aggrieved securities holders came to the conclusion that Russian government bonds had been placed for at least 950 million guilders in the Netherlands alone – an amount that equaled the balance sheet total of the Nederlandse Bank over 1917-1918. It should however be taken into account that not all investors participated in the survey; consequently, in reality, the amount that disappeared must have been much higher. Despite the efforts of the association and the government in The Hague, the aggrieved investors have not received any return on their investments until this day. Because of indignation about this matter, it took until 1942 before the Netherlands recognized the Soviet Union as a state.

In 1997, the French government managed to obtain a limited compensation. The French succeeded in doing so because France still preserved Russian gold stocks. As early as 1986, Great Britain also managed to get back a part of the British investments. Since the revolution, the Bank of England still had frozen credits of the tsarist regime. Therefore, the British were able to make a fist, too. Unfortunately, the Netherlands did not have anything with which it could enforce repayment. Moreover, the documents in the United Kingdom and France were registered by name, whereas in the Netherlands, the documents concerned were bearer instruments. This significantly complicated the burden of proof. The most recent (brief) talk of making arrangements for the Netherlands was in 1998. This ultimately did not lead to any progress. Will repairs eventually be made? Time will tell.