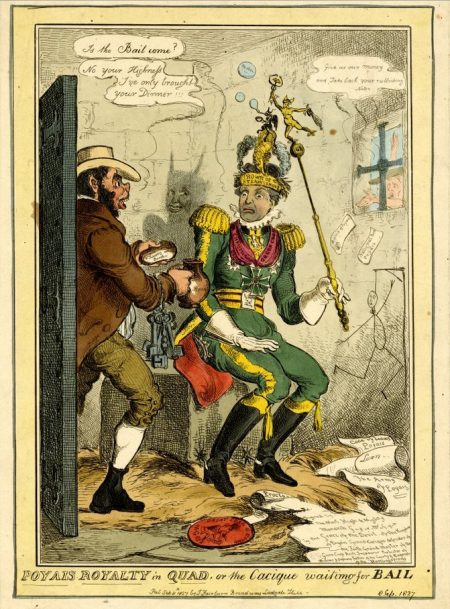 Caricature of the Poyais affair depicting the supposed head of state in a cell. The story goes that MacGregor managed to escape imprisonment because of the help and involvement of influential London bankers.

A Poyais bond from 1823. The cut off coupons had to convey the impression that interest had already been paid before.

Scotsman MacGregor (1786-1845) was the mastermind behind the Poyais swindle.

Map of Poyais and immediate surroundings, as drawn by Strangeways. According to the map, Poyais was situated somewhere near Honduras. However, its creator Strangeways turned out to be none other than MacGregor himself.

Poyais: investing in an imaginary country

In 1821, a particular gentleman arrived in London: Gregor MacGregor, Sovereign Prince of the independent state of Poyais. An invented country, somewhere in Central America. In today’s internet era, it is very likely that such a fabrication would have been debunked within no time. In the early 19th century, however, many investors were completely fooled by it. Along with a partner, MacGregor laid down the most wonderful plans for the development of his country. Obviously, this required a lot of money. In 1823, they managed to place a full 5% debenture loan of 200,000 pounds. The duo also resold shares with some cut off coupons. In doing so, they slyly conveyed the impression that interest had already been paid before. In 1827, a second loan followed. And even though rumors that this was a fabrication were increasingly spreading, investors – also in the Netherlands – were very interested.

When it became clear that the Poyais story was a total scam, the likely public fury did not occur. It so happens that defrauded investors do not like to admit that they have been too greedy and gullible. Swindler MacGregor, originally from Scotland, managed to escape to Venezuela, where he continued to live in anonymity for some time.

Scams like that of Poyais gave cause to better regulation of the financial markets. Particularly for the Netherlands, financier of foreign countries, reliable information was very important. Thus, it is no coincidence that the modern professional stock exchange organization we know today gradually arose in Amsterdam in the course of the 19th century.