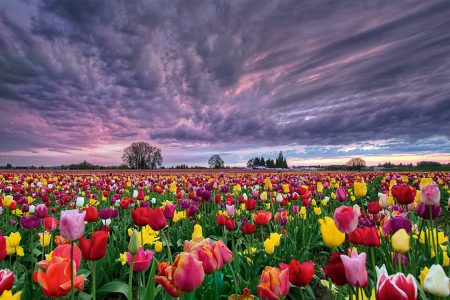 Whenever a storm is imminent in stock markets, a reference to the Tulip mania as the first exchange crisis ever is often mistakenly made. The Tulip mania had little or nothing to do with the securities exchange. The first real securities crisis is the 1720 Wind Trade Crisis.

The most sought-after tulip species was the Semper Augustus, an extremely rare flamed version. At its peak, so the story goes, 10,000 guilders - over six times as much as the amount Rembrandt received for the Night Watch in those days - were paid for one bulb.

A parody of the Tulip mania by Jan Brueghel de Jonge (1601-1678), containing monkeys who excitedly participate in tulip trade.

The actual name of the main character in the painting entitled ‘The Anatomy lesson of Dr Nicolaes Tulp’ by Rembrandt was Claes Pieterz. Because of his great fondness for the flower, he took his new name.

The first tulips to bloom in the Netherlands were planted in gardens in Amsterdam and Laren around 1590. More than thirty years later, tulip bulbs had penetrated the commodity futures market. Speculative trading – especially in Haarlem and Alkmaar – quadrupled the price of the exotic crop between 1634 and 1636. Such speculation was not allowed on the Amsterdam exchange because of a 1610 prohibition.

Craftsmen pawned their instruments or incurred debts in order to profit from the exploding prices. In 1636, 20 guilders still would have bought you a cheap variety; in 1637, it was 1,200 guilders. A bulb of the extremely rare Semper Augustus still cost 1,000 guilders in 1624, whereas its price had risen to 5,000 guilders in 1633 and to 10,000 in 1637. For the purposes of comparison: one paid 1,600 guilders for Rembrandt’s Night Watch in those days.

On February 5th, 1637, an orphanage from Alkmaar brought a special small batch of bulbs on the market for which 90,000 guilders were paid. However, at the same time, interest waned in other places. Buyers passed. Within a short period of time, the value of tulip bulbs decreased to 5% or even 1% of what people had paid for them before. Growers were willing to convert contracts with a purchase obligation to option agreements. If one refrained from purchase, one had to pay 3.5% of the original purchase price. Sadly for the orphans, this possibility to escape was used in Alkmaar, too. The first speculation crisis in history had no negative impact on the overall economy, but the ones who lost big were the small craftsmen who had pawned their tools and who became unemployed.