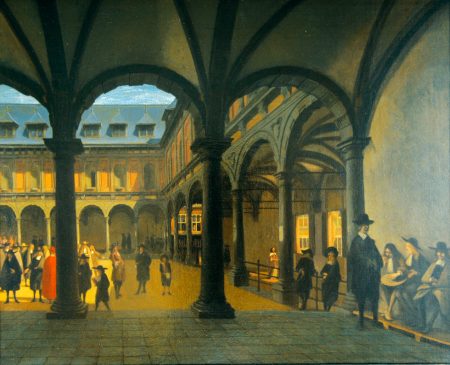 The Beurs van Hendrick de Keyser on a painting by J.A. Berckheyde (1630-1693). Exchange trading took place here in the time of the foundation of the Collegie tot Nut des Obligatiehandels (College for the Benefit of Bond trading).

Around 1800, the first securities companies emerged. To work in the securities business, one was required to be able to make quick calculations - even back then -, as evidenced by this 1812 job advertisement.

Sworn brokers were obliged to present their broker’s rod (‘makelaarsstokje’) when doing transactions on the exchange. A 1795 version is depicted here. The arrival of many ‘moonlighters’ on the exchange was a reason for securities brokers to join forces in the Collegie in 1789.

In 1839, the Collegie - by then called Sociëteit (Society) - existed 50 years. This celebration song is proof that the French period (1795-1813) was difficult for securities trading, but that there was a profound belief in King Willem I and his pursuit of setting the Dutch economy on its feet again.

The end of the eighteenth century was a turbulent time. The Fourth Anglo-Dutch War, The French Revolution, and tension between patriots and royalists – in the Netherlands – created an uncertain investment climate. The once powerful Dutch East India Company was in its final days, as was the West India Company. Share traders saw increasingly fewer opportunities. For some of them, trade in bonds was a rewarding alternative. Initially, bonds were a quiet and sound investment, but that changed soon due to economic and political turmoil. Solid bonds traders found themselves increasingly surrounded by speculators of all sorts, and a derailing trade was greatly feared.

To guard against abuse, the Collegie tot Nut des Obligatiehandels (College for the Benefit of Bondtrading) was founded in November 1789. It was the first securities exchange organization in Amsterdam. The main tasks of the new organization included the monitoring of listings and the provision of reliable price data. To achieve the latter aim, the Collegie contacted printer and publisher Nicolaas Cotray in order to publish a price list twice a week. This resulted in some improvement, but according to some, the listings in the price list were not precise enough. In 1833, they founded the Nieuwe Handel-Sociëteit (New Trade Society) and published their more accurate prices in the Handelsblad (Trade Journal). Both organizations would coexist for over twenty years before a cooperation and, eventually, a merger would follow.