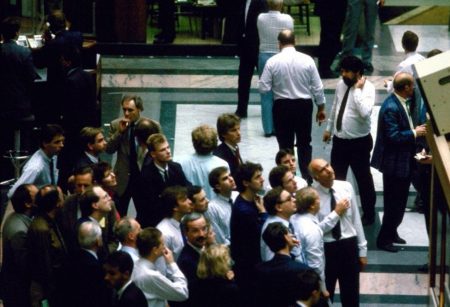 Tense faces on the Amsterdam exchange during the October crash of 1987.

Unlike in 1929, the collapse of Wall Street had significant and immediate consequences in Amsterdam, according to the Volkskrant of Tuesday, October 20, 1987.

Time Magazine America was outspoken in its judgment on the consequences of the crash.

The panic on the exchange was shown in daily newspaper De Telegraaf using striking headlines and pictures.

On Monday, October 19, 1987, share prices plummeted, without any apparent reason. The EOE index – as the AEX index was then called – on the Amsterdam stock exchange also dropped by 12%. One day later, this was followed by an additional 6% loss. In contrast to the 1929 Wall Street crash, many private investors were now directly involved in the price drop. Investing had gained popularity, not in the least because of an average price increase of 350% between 1982 and October 1987. Additionally, markets responded faster to US developments now than they did in 1929.

What triggered the sudden panic? After 1985, the dollar exchange rate showed a sharp decline. Because of the cheaper dollar, the Americans had to pay more for their import goods. Costs of living rose, and inflation began. Consequently, the value of debentures – tradable US government loans in dollars – decreased. Investors decided to sell these debentures en masse. To compensate for the inflation of the dollar, the interest rate had to go up. Within a month, the interest rate on the capital market rose from 7% to almost 9%. This was a bad development for the United States; there was a budget deficit of no less than 15.7 billion dollars.

Foreign investors became wary. In addition to the currency risk on US bonds, there was uncertainty regarding the further consequences of inflation. Turmoil ruled on securities exchanges. On Friday, October 16th, the Dow Jones index already lost 109 points, and the following Monday was Black Monday all over the world. The Dow Jones tumbled 22%, and 600 billion dollars vaporized within one day. Nevertheless, the consequences of the crash were limited. Share prices rose again because of bargain hunters who started buying the shares. Out of the 40  specialists (‘hoekmannen’) on the Amsterdam stock exchange, only one did not survive, and several companies postponed their initial public offerings. In America, the government took measures, including tax increases, with which to cover the budget deficit. Late 1987, the Dow Jones had returned to its former level. It took the EOE index until January 1989 to achieve the same result.