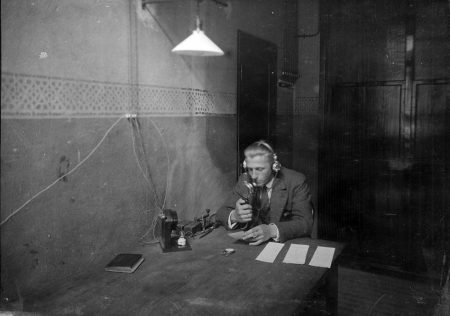 Several years before a radio broadcasting service was introduced in the Netherlands, Beursplein 5 already had its own radio station. The first broadcast was held on November 1, 1920. A specially appointed broadcaster passed on the latest quotations to affiliated securities firms every fifteen minutes.

Following the example set by New York, a Tikkerdienst (ticket service) was established in Amsterdam in 1931. From this epicenter at Beursplein 5, it ensured a rapid dissemination of quotations until 1971.

The radio studio at Beursplein 5 was given an increasingly professional appearance over time. In the studio’s early years a precursor of the General Dutch Press Agency (ANP), also used the studio for its broadcasts - in addition to the exchange.

With the disappearance of the Tikkerdienst (ticket service) in 1971, the projection of rates on the guide bank also disappeared from the exchange floor. Instead, traders got a large rate board.

A world first: prices through radio

In 1920, the Amsterdam securities traders experienced both a national and a worldwide first with the introduction of a radio station on Beursplein 5. Not only were they able to use this then-revolutionary communications technique, which was well before national radio broadcasting in the Netherlands emerged; they were also the first traders in the world who could use this, since the Amsterdam securities exchange was the first to offer the facilities.

Both scoops did not stand alone. Traditionally, the securities exchange had acted as a pioneer in the field of the distribution of information and communications techniques. Since the times of the VOC, it was common knowledge that it was essential for traders and investors to have timely access to accurate and reliable information. This understanding only grew as the Netherlands developed into financier of foreign countries during the 18th and 19th centuries. To keep investors informed of the many ‘distant’ investments, the stock exchange first published a price list. But that was not all; since the 19th century, exchange buildings also had had their own postal, telephone, and telegraph offices.

The pneumatic dispatch system that Beursplein 5 was equipped with from the very start was also highly innovative. Market reports could be sent out at a speed of 90 kilometers per hour (!). In 1931, the price dissemination increased enormously with the start of the Tikkerdienst (ticker service). Through it, the latest prices were published on a price board on the exchange floor and simultaneously messaged to subscribers in the country. With the introduction of the first telex, and, later, automation, the ticker and the price board disappeared from the daily stock market practice. The importance of accurate and fast information as well as advanced techniques has remained, and it has only increased since the introduction of screen trading.