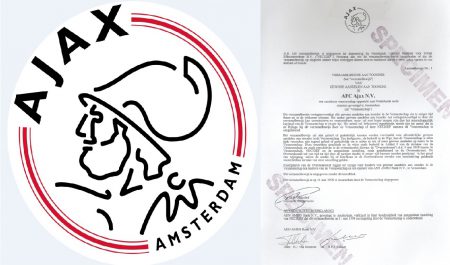 During its 1998 stock-market launch, Ajax has never issued paper shares, possibly to the regret of its supporters. The issuance of this global note, a simple piece of evidence for the total share issue, was as far as it got.

In 2013, the last paper share went into the shredder at Euroclear Nederland. Fortunately, this ‘oldest share’ of the VOC was not included, and it is still safely stored in a safe at the exchange.

A look inside the former vault of Euroclear Nederland (formerly Necigef) on the Herengracht in Amsterdam. In the early nineties, the safe contained more than eight million papers with a total value of over 800 billion euros.

The exchange employed strict rules with regard to the layout and quality of securities. This often resulted in beautifully designed shares and bonds.

The increase of securities trading in the second half of the 20th century showed just how impractical many of the processes were. In case of a dividend payment, the shareholder had to cut off a coupon and submit it to a paying agent appointed by the company. Because most of the shares were kept in banks’ safe deposit boxes, bank employees could spend weeks simply clipping coupons. Whenever a transaction took place, couriers had to take the shares from one bank to the other each time. Therefore, from the nineteensixties onwards, a long process for simplification of the administration and custody of securities was set in motion.

A first step was the launch of the Centrum voor Fondsenadministratie (Center for Securities Administration) in 1964. This institution took over a lot of work from banks and investors. Henceforth, cutting off coupons was no longer needed. A second step was the establishment of the Dutch central securities depository Necigef in 1977. Nearly all the Dutch physical securities were placed with this depository company. Not only were the banks able to reduce their safe deposit box space, it had also become unnecessary to lug around packages of shares.

In the early nineties, the Necigef safe on the Herengracht in Amsterdam contained over eight million paper files with a combined value of more than 800 billion euros. Unless an investor chose to keep them at home, he would never see paper securities anymore. He only received statements stating the amount of pieces he had bought or sold.

In the late nineties, Necigef (Euroclear Nederland as of 2001) took a major third and final step towards paperless securities transactions. A digitization process for data and destruction (‘dematerialization’) of the securities  was initiated. In 2013, the last shares and bonds went into the shredder. Four centuries after the first issuance of the VOC, this marked the final goodbye to the paper share in the Netherlands. Nowadays, companies only issue electronic pieces with emissions. The only thing that still ends up in the safe is a global note, a simple single document that represents the entire capital of a share issue by itself.