Amsterdam appears to have surpassed London in the month of January as Europe’s largest trading centre for shares. Per day, an average of €9.2 billion in shares was traded, more than four times as much as last December. Conversely, London fell from an average daily volume of €14.6 billion to €8.6 billion over the same two months.

The fact that Amsterdam has suddenly become the capital of European share trading has everything to do with the Brexit at the end of 2020, as a result of which London platforms are not (yet) allowed to trade in shares of companies from EU countries. The choice for Amsterdam as an alternative trading venue appears to have several reasons. Not only the high level of experience due to being the birthplace of stock trading and the digital strength of the Netherlands play a role in this respect, a strong international orientation and great knowledge of the English language have also contributed.

Nevertheless, Amsterdam’s gain is relative. It is CBOE Europe and Turquoise, two trading platforms that relocated to Amsterdam with a small office shortly before the Brexit, where the trade from London mainly takes place. The Amsterdam stock exchange itself only sees an increase in turnover of a few percent. Moreover, it remains to be seen whether this is a permanent development. For the time being, the EU and the United Kingdom do not recognise each other’s trade rules and regulators, but should this change, according to experts, there is a good chance that the volumes will just as easily flow back to London. 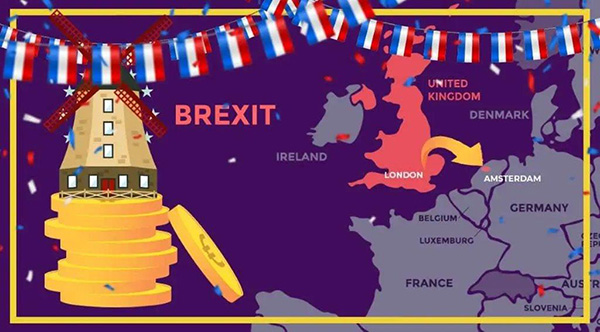